How does our technology work?

The PARFORCE-Technology is a flexible, environmentally friendly wet-chemical process for the production of universally applicable phosphoric acid by refining primary and secondary resources containing Phosphorous.

PARFORCE consists of a core technology "PARFORCE Core" and - depending on the application and the feedstock to be processed - one or more further upstream or downstream or integrated additional process components. 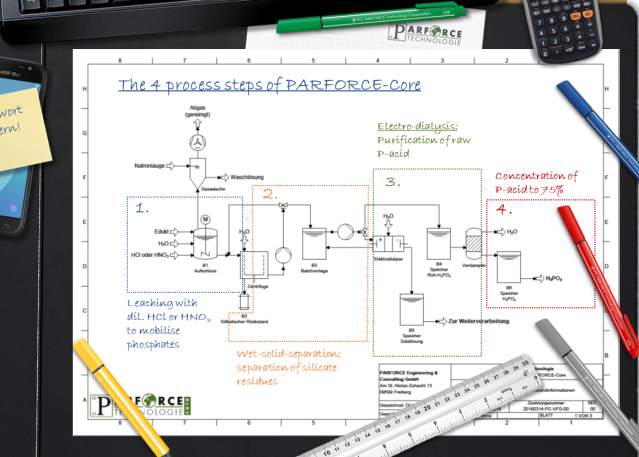 PARFORCE-Core is a wet chemical process in which, in the first process step, the phosphate-containing primary or secondary raw material to be processed is chemically digested in a digestion reactor using hydrochloric or nitric acid.

The digestion suspension is filtered in a second step and the phosphoric acid is separated in a third process step by a membrane process. The fourth step is the concentration of the P-acid to 75% to 85% (commercial standard).

Our aim is to gain a basic chemical in primary quality in almost closed cycles – that means our product is equivalent to or even better than a product stemming from primary raw material in terms of quality characteristics and we produce no waste, that need to be disposed of.

The variability of our process allows the targeted production of by-products through appropriate process design. For example, by varying the digestion acid and the process, either the digestion acid used in the process can be recovered or road salt or calcium nitrate, which is used as a raw material in the fertiliser industry, can be produced.

When magnesium ammonium phosphate - also called struvite (residue of sludge treatment in wastewater treatment plants) - is refined to P-acid, magnesium chloride results as a by-product, which can be reused as a source of magnesium for struvite crystallisation in the wastewater plant, thus closing loops.

The PARFORCE-Technology is tailored to the specific conditions and needs of each customer. Each of our concepts for solving P-recovery is always preceded by a solid investigation following scientific standards with laboratory and demonstration tests. Planning is based on technical and economic feasibility studies.

The technology uses standard components from plant engineering that can usually be manufactured and supplied on an industrial scale by various suppliers in comparable quality. There are therefore no risks from the development of new plant technology.

What is the "extended PARFORCE approach"?

The "extended PARFORCE approach" is patent pending and intensifies struvite separation during sludge treatment. Known process principles such as sludge disintegration and struvite crystallisation are adapted and combined in an innovative way so that a removal of up to 2/3 of the phosphorus contained in the sludge is achieved.

With PARFORCE struvite crystallisation does not take place in the digested sludge, as in most struvite processes, but in the liquid phase before anaerobic sludge treatment thus allowing a very effective separation of the struvite crystals – independent of crystal size. The decisive feature of the "extended PARFORCE approach is that it achieves a very high release of Phosphorus from the solid matter and a very effective solid-liquid separation of disintegrated excess activated sludge by means of a special process design.

To investigate whether this option is feasible for your wastewater treatment plant we conduct laboratory tests and prove the concept on site with our mobile experimental plant in scape up trials.

The "extended PARFORCE approach" can also be integrated into an existing sludge treatment line that already has a sludge disintegration and a struvite crystallisation. 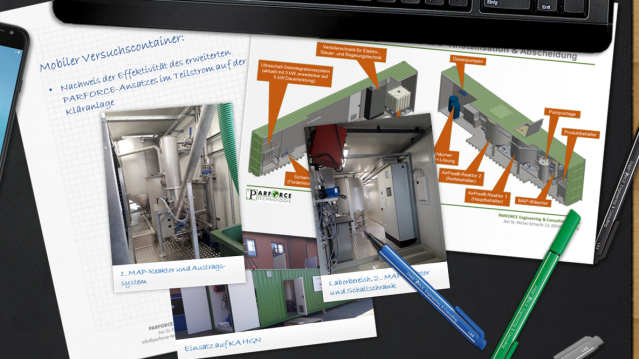